President Nana Addo Dankwa Akufo-Addo has commissioned a new Business Resource Centre under the Rural Enterprises Programme (REP) of the Ministry of Trade and Industry at Kadjebi in the Oti Region.

The facility, with a showroom and a marketing department is to promote small and medium scale enterprises and open up the area for accelerated socio-economic development.

President Akufo-Addo, addressing a durbar of chiefs and people of Kadjebi at the commissioning ceremony as part of his three-day tour of the Volta and Oti regions, said government was committed to working on deplorable roads in the region to promote economic activities and expressed gratitude to the chiefs and people for their continued support.

He said the centre was part of government’s plan to distribute key government agencies across the newly created regions for their rapid growth.

Nana Owusu Sekyere II, Akwamuhene, Kadjebi Traditional Area said the area had “seen and recognised” government’s efforts at improving the lives of the citizens through the Free Senior High School (SHS), Planting for Food and Jobs and payment of nurses and teachers allowances.

He commended President Akufo-Addo for developmental projects on-going at Kadjebi-Asato Senior High School and appealed to the President to utilise a 650-acre free land at the school to build a university in the district.

Mr Alan Kyeremanteng, Minister for Trade and Industry said the district would get a Ginger factory to help farmers have ready market for their produce.

He encouraged the people, especially the youth to make good use of the Business Resource Centre to get technical support for the growth of their businesses.

Mr Kwasi Amoako Atta, Minister for Roads and Highways said the ministry had taken inventory of all roads in the six newly created regions and added the 2,100 kilometres of highway, urban and feeder roads in the Oti Region would be worked on.

He said three roads; Nkonya Wurupong-Kwamekrom, Jasikan-Nkwanta and Nkwanta-Chilinga were selected as part of government’s critical roads that would receive the needed attention.

Mr Amoako added that the 47 kilometre Dodo Pepesu-Nkwanta would be re-constructed with pothole patching and re-sealing already on course, while the Dambai, Jasikan and Nkwanta town roads were being worked on.

The minister said government had commenced work on the Eastern Corridor road and called for support of all.

‘Govt will enforce laws on environment’ 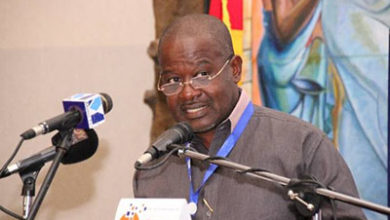 Heads of Local Government Service to remain at post

W/R NPP ballots ahead of primaries