Conservation Alliance (CA) has called on stakeholders in the cocoa sector to ensure that pesticides used by cocoa farmers are less harmful to crops and human.

This was based on a research conducted by CA in collaboration with its implementing partners Rainforest Alliance from 2017 to 2020 in cocoa growing areas in Ashanti, Eastern, Western, Bono, Ahafo and Central regions of the country.

At a workshop held on Tuesday in Accra, findings of the research were shared and stakeholders provided legal framework to guide Highly Hazardous Pesticides (HHPs) in the country.

It was aimed at implementing cocoa advocacy project to enhance a better access to inputs and better practices and to also promote integrated pest management (IPM) within Ghana’s cocoa sector.

At the end of the research, it was revealed that, cocoa farmers were aware of the CODAPEC spraying programme and that they were of the view that the use of good agricultural practices was the only way to reduce reliance on pesticides.

It also stated that only half of the farmers knew that the pesticides they use were HHPs.

It again indicated that pesticides such as Confidor and Condor, used mainly in cocoa, were also used by some vegetable farmers while only three were non- HHPs.

A professor of Botany at the University of Ghana, Prof. Alfred Oteng Yeboah said the use of pesticides by some farmershad affected yields.

He said “if Ghana’s cocoa sector is to thrive very well, then the effects of pesticides use in cocoa production especially in health and environment must be seriously looked at.”

Prof. Yeboah called on the government to tighten pesticide approval processes to phase out harmful pesticides and also clamp down on the influx on unapproved pesticides in the market.

He said alternatives to the use of harmful pesticides in agricultural production, especially cocoa production should be vigorously pursued to boost productivity as well as safeguard the health of farmers and environment.

The Acting Director, Chemicals Control and Management Centre at the Environmental Protection Agency, Dr Sam Adu-Kumi (EPA) said his outfit was working to reduce the HHPs in the system.

“For now we need to do control management of the chemicals in the country as well as those being imported and also ensure users of these chemical put on the right Personal Protective Equipment (PPEs),” he said.

THE GREAT CHALLENGE OF LIFE 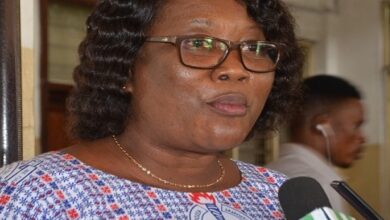 Akatsi Chapter of GNAT worried about unavailability of PPE