Vice President Dr Mahamudu Bawumia, has assured Muslim communities in the Western Region of the government’s commitments towards Arabic and Islamic education.

He, therefore, urged the Muslim community to exercise patience as the government addressed the challenges over the years.

Dr Bawumia gave the assurance when he joined the Muslim community at Axim in the Nzema East Municipality, on Saturday, to fast and pray as they marked the Ramadan month.

One key pillar of the government’s efforts in the education sector, he explained, was the free Senior High School programme which would benefit the poor, including Muslims and also improve learning and the aspirations of the youth toward better future opportunities.

Again, he told the faithful that 3,000 Arabic teachers had been recruited to also help improve Islamic education in the country.

He said soon the school feeding programme would be introduced at the Islamic School at Axim, adding that “we are focused to deliver on our plans and programmes.”

The Chief Imam at the Central Mosque, Sheik Abubakar, complained that all efforts to get the school feeding programme at the Axim School had not worked and expressed the hope that their plea would receive good attention and action.

At Kamgbunli, Dr Bawumia visited the Islamic Senior High School and told the community that that Islamic education remained a key priority of the government and assured that the assembly hall and boarding facilities would be addressed to improve infrastructure, teaching and learning.

“I will discuss with the GETFUND   as to how we address your challenges of space so that you can improve teaching at the school and also raise standards.Indeed, government is committed and we will make every efforts to support you. And, gradually we will do It.”

“We are working and it’s only God who can help us move ahead, but we need to pray. We are changing the paradigm and we will get there.” the Vice President said.

The Chief Imam of the Al-Sunna Community in the Western Region, Sheikh Suleimana Mozu, reported that the Kamgbunli Islamic School began in the year 2000, commenced enrolment in 2008 and became a government assisted institution in 2011.

He said, the Kamgbunli School, the only Islamic secondary school in the region, was faced with challenges of space including boarding facilities saying “we want to change the future of this school and we need your supports.”

The Minister for Inner City and Zongo Development,Dr Mustapha Abdul-Hamid, told the Axim Community that the Ministry of Gender, Children and Social Protection would work on the school feeding issues to ensure that the Al Sunna Islamic School at Axim also benefitted from the programme.

“We should be patient, you will soon see a lot of things happening in the Zongos.” he added. 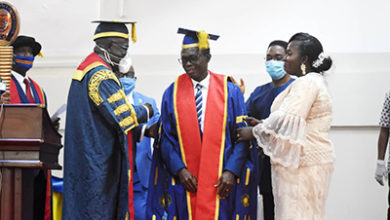