Survivors of the recent Islamist militant attack on Palma in north-east Mozambique have been talking about how they got out amid the bullets and mortar shells, as Catherine Byaruhanga and Kyla Herrmannsen report.Eusebio Alves Pinto was just finishing his shift at the Amarula Hotel when he saw people fleeing towards the compound.”I asked them what was happening? They said the situation was not good,” he told local TV station TVM.”Then I began to hear gunshot after gunshot.” He ran back inside.This was the beginning of a well-coordinated assault on Palma that started on 24 March.

The postcard-pretty town itself was already hosting thousands who had fled violence in the surrounding area – the country’s northern Cabo Delgado region has been hit by an insurgency for the last four years.

It was besieged and running out of food.

The town’s infrastructure has barely been developed but just 10km (six miles) away the construction of one of the biggest investment projects in Africa was under way.

Despite the uneasy peace in Palma, workers and contractors, both foreign and Mozambican, flew in regularly to develop the project.

The Amarula – a focal point for the attack – sits on several acres and was popular with these contract workers.

But when the militants, linked to the so-called Islamic State, charged into Palma local residents nearby also sought shelter there.

Initially, the people inside the compound were able to get messages to family and friends about what was going on, but telephone and internet lines were cut.

Richard Davis, whose name we have changed to protect his identity, is a South African contractor normally based in the region’s capital, Pemba.

He believes that 190 people were sheltering at the Amarula, adding that “the vast majority” were locals.

Mr Davis had arrived in Palma just hours before the attack began and described how a flight coming in after his had to quickly take off again because of gunshots.

The government has said the militants attacked the town from three directions, the airfield being one of them.

On that first day, Mr Davis remembers listening “to this battle through the day and night. The following day mortar bombs were landing at our fence, the bullets were hitting the hotel.”

Fighters from the private security firm Dyck Advisory Group, which had been hired by the Mozambican government to fight the insurgents, were battling with them near the hotel.

Mr Davis was one of the lucky ones.

On Thursday he and 19 others were airlifted out of the hotel in helicopters. It would not be possible to extract everyone in the same way.

In Johannesburg, in neighbouring South Africa, 21-year-old Gracie Alexander told the BBC about the messages she was receiving from her father Nick Alexander who ran a construction company in Palma.

Mr Alexander was also at the Amarula hotel.

“He sent a video of the gunshots that were going on and he told us just to be praying and thinking of him and that he was hoping to be evacuated as soon as possible,” his daughter said.

Desperate after two days under fire and with hardly any food or water, a plan was devised to drive the remaining 170 people out of the Amarula in a convoy to a nearby beach where boats would take them to Pemba, where Mr Davis was now helping coordinate the rescue efforts.

“They decided they had to make a run for it and just try it at least,” he said.

“There was one armoured vehicle – a 10-seater at the back – and they packed all these women and children from the village into it.”

Around 17 cars made it out of the hotel but almost immediately the convoy came under attack – 10 vehicles did not make it to the beach. 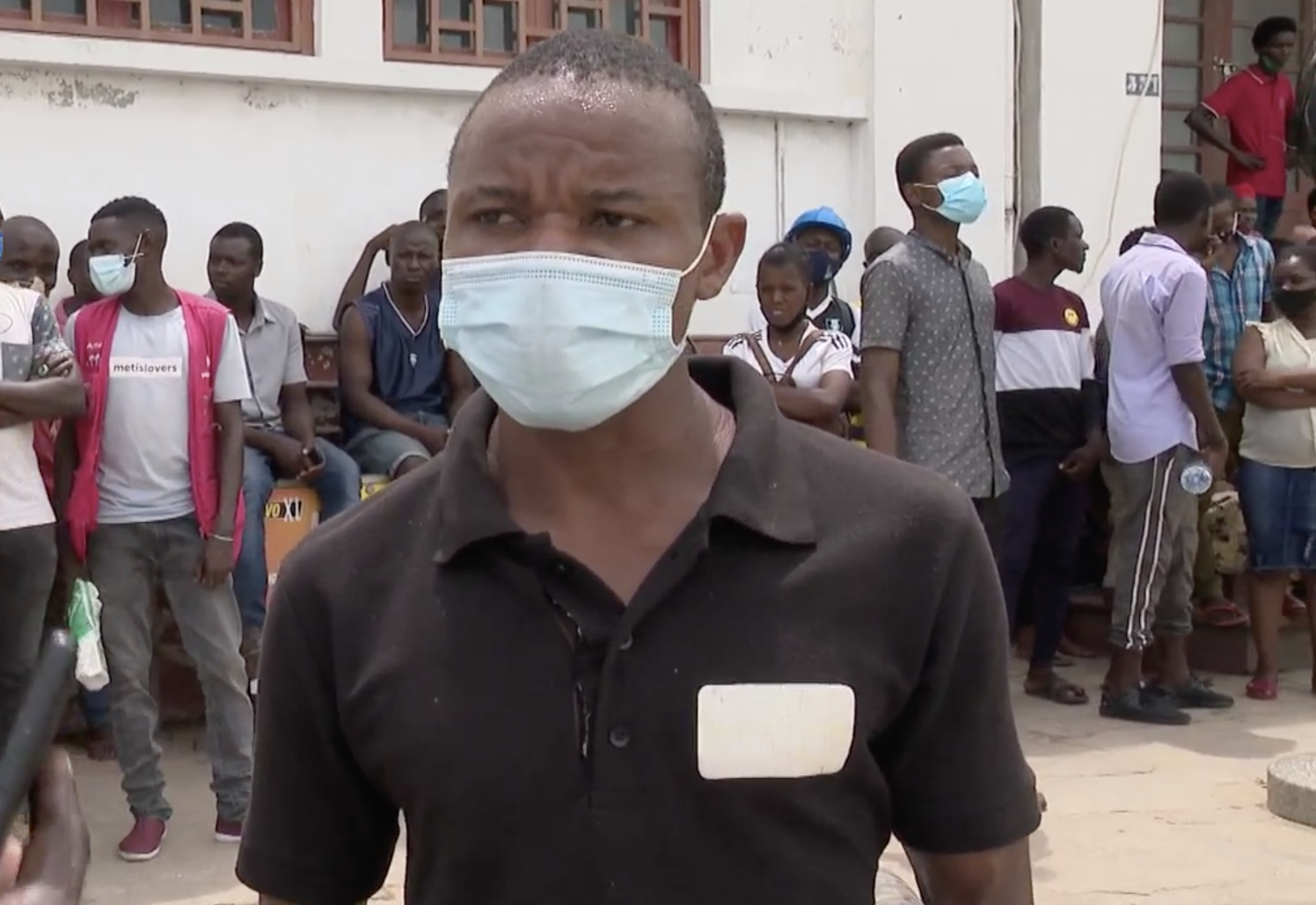 Mr Pinto, the hotel worker, was in the convoy, and felt lucky to have made it out alive.

“I saw dead bodies when we left the hotel. Many people died,” he said.

Nelson Matola, who was working in Palma also hid out at the Amarula and was caught up in the ambush.

“It was a massacre. I think none of us want to go back there.”

The Mozambican government has said that at least seven people were killed in the incident but Mr Matola said the number was much higher.

“Not just seven! Many died, some foreign colleagues lost their lives in that exit.”#

Ms Alexander’s father Nick later found out that he had escaped the convoy.

“When the ambush happened, he jumped out of the convoy and ran back to the hotel and then he found a gun and ran across the street into the bushes and just stayed hiding.”

After two days, he was found by a helicopter searching for survivors – to the immense relief of his family.

“He found a satellite phone that he used just to tell us that he’s alive. He was just in tears – I think he thought he was just never going to see us again,” Ms Alexander said.

Those who made it to the beach then had to spend the night hiding from the attackers.

South Africans Greg Knox and Wesley Nel were among those on the beach. They had managed to recover the body of Adrian Nel – Mr Knox’s step-son and Mr Nel’s brother.

Mr Nel’s mother, Meryl Knox, told the BBC they’d been left to their own defences during the attack on Palma.

“You can imagine – no army to protect them, none of them having weapons so it was a matter of run for your life or face these insurgents…This could have been avoided, my son could still be alive today.”

‘Where was the support?’

It is believed he was killed while driving one of the convoy’s vehicles.

“Where the hell was the support, you know? From big companies, from countries? It’s just not right. It’s disgraceful, There were so many more casualties than there should have been,” he said.

By Saturday morning, the first boats rescuing the survivors at the beach started sailing in to Pemba, about 250km (150 miles) to the south – they were manned by civilians, some were cargo ships which had been passing Palma and decided to help when they heard of those in distress.

More and more people with their own stories of terror are still reaching Pemba.

Mariamo Tagir, who lost her son in Palma, arrived on board a ferry carrying more than 1,000 people on Thursday.

“I’m so tired, it was seven days [in] the bushes,” she told the Reuters news agency. “We crossed path several times with evildoers, the situation is really bad – many dead, many dead.”

She joins thousands of other displaced people in the city, including Mr Pinto.

“I am empty handed,” he said. “I don’t know whether my house and other belongings were set ablaze or not. I took nothing.” 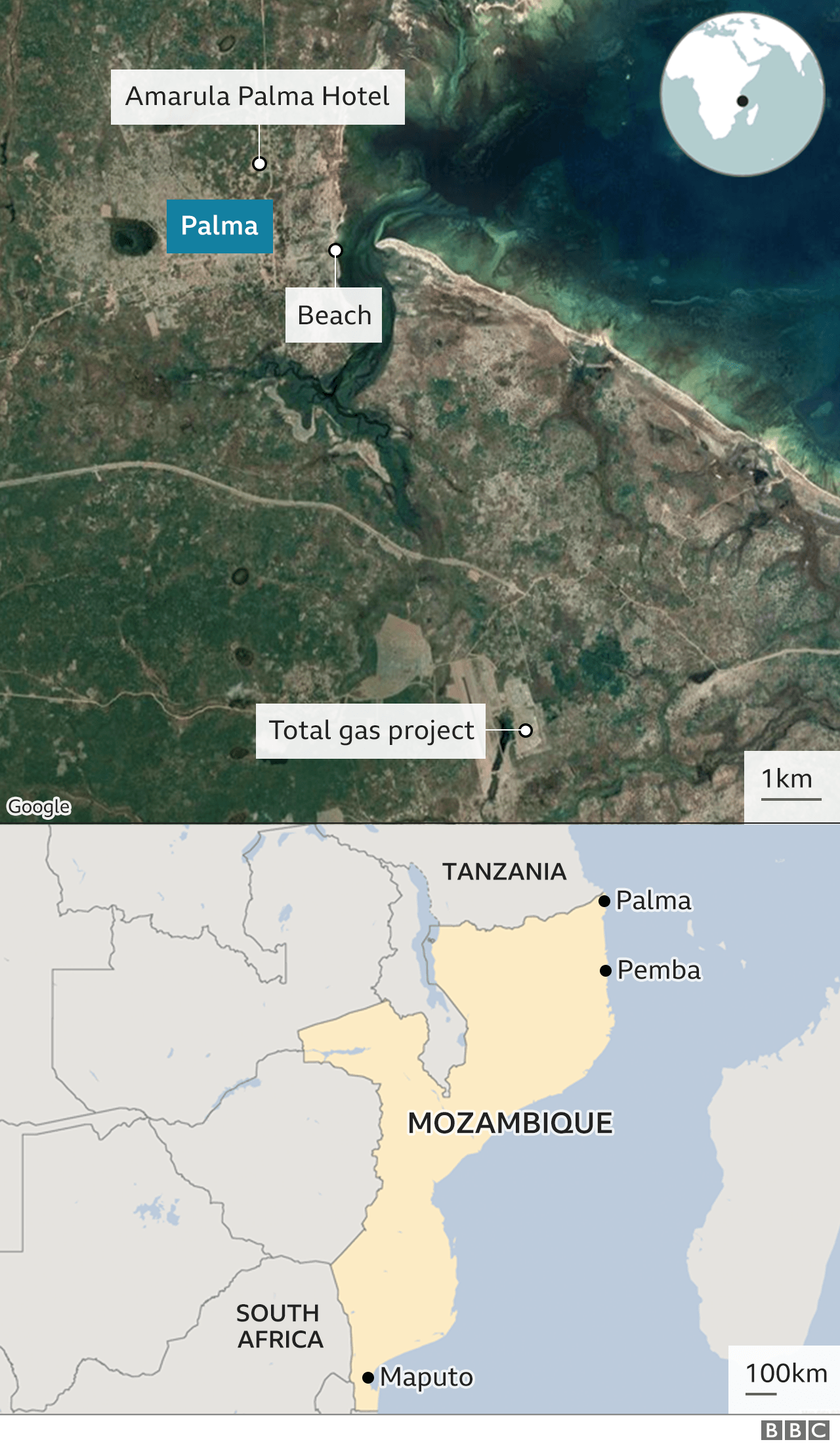 Dead heat for Kenya presidency …as election results trickle in

Freetown in shock after dozens killed in protests

Dead heat for Kenya presidency …as election results trickle in

Freetown in shock after dozens killed in protests