The visit afforded them the opportunity to establish a link between academic work and field practice to prepare for the job market.

The students accompanied by some of their teachers were conducted round the Ghanaian Times and The Spectator newsrooms and the production departments where they were briefed on newspaper production.

The News Editor of the Ghanaian Times, Mr Matthew Ayinne Ayoo, educated the students on the organisational structure of the flagship newspaper and the production process.

He said the Corporation was established in 1958 by Ghana’s first President, Osaygyefo Dr Kwame Nkrumah, as a media publishing house to inform and educate the masses and promote the development of the country.

Mr Ayoo indicated that the NTC was not only established to inform the masses but also for the vision and policies of Dr Nkrumah to be visualised.

The Ghanaian Times News Editor stated that on news production, reporters across the country submit timely and accurate reports on events for publication.

He encouraged the students to leverage on modern technology to create jobs for themselves and others after completion of their study and urged them to study harder in the pursuit of academic excellence.

“Heed the advice of your teachers and strive to be good, read the newspapers regularly to be abreast with new information and to enrich your writing skills,” Mr Ayoo said.

Paa Kwesi Entsie, the head of department of Visual Art who led the students thanked the management and staff of the NTC for their warm reception.

He said the visit would afford the Visual Art and the Economics students with practical know-how on the General Art knowledge course, adding that “this will help them in their future career.”

Paa Entsie commended the management of the corporation for its immense  contribution in ensuring development in the country through mass communication. 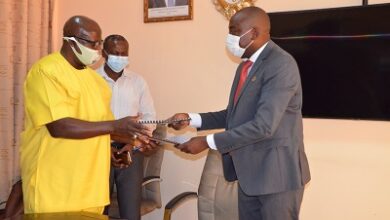