I have heard Ghanaians complain, sometimes bitterly, about their MPs. Some of them have joined the Rt. Hon. Speaker, Mike Oquaye to complain about non attendance at Parliament. They complain about the MPs’ performance and now about their behavior in public. Recently a female MP was alleged to have led a gang to go on gun firing expedition at a voter’s registration centre in the Central Region. The work of Parliament is said to be done by just a few devoted and conscientious MPs. The public expects their MPs to hold the Executive accountable and check its excesses but they are not doing that. MPs have been accused by the electorate of rubber stamping bills and bad loan agreements submitted to Parliament by the government. And what bothers many people is that Parliament is deeply and irreversibly split between the “Siamese twin” NDC and NPP and there is no consensus building on issues of national interest. The Executive has completely dominated Parliament to the extent that Ghana’s Presidents are now viewed as constitutional despots. Ghana runs a tight national budget, in fact a deficit budget, but it must find money to pay 275 MPs in the name of democracy. The chronic absenteeism and unsatisfactory performance of MPs have compelled Ghanaians to question the rationale for having as many as 275 MPs.

Under the existing constitutional framework Ghana definitely need MPs. In fact, without MPs and Parliament to partner the Executive and the Judiciary our present democratic arrangement would be considered incomplete. But the big question is whether Ghana needs 275 MPs to pursue its democratic agenda? The Constitution says we should not have less than one hundred and forty (140) MPs but unfortunately, it does not give any upper limit or ceiling to the composition of Parliament. “There shall be a Parliament of Ghana which shall consist of not less than one hundred and forty elected members” (Article 93(1). Does that mean Ghana can have as many MPs as possible provided we do not go below one hundred and forty members?

The situation is made more intriguing by Article 47(1) which says that “Ghana shall be divided into as many constituencies for purpose of election of members of Parliament as the Electoral Commission may prescribe, and each constituency shall be represented by one Member of Parliament.” And here comes the killer article or the coup de grace where Article 47(5) gives absolute powers to the Electoral Commission (EC) to “review the division of Ghana into constituencies at interval of not less than seven years, or within twelve months after the publication of the enumeration figures after the holding of a census of the population of Ghana, whichever is earlier, and may, as a result alter the constituencies.” Does this mean that the EC has the power and the discretion to increase the number of MPs after every seven years or after every census without any formula or constitutional guidance?How can such blanket and unlimited powers be given to mere mortals who, in all cases, are appointed by the President? In Ghana’s situation, such powers are bound to be abused and have, in fact, been abused in order to give effect to gerrymandering.

Here it must be admitted that the Framers of the Constitution slipped. Were they hypnotized into granting the Electoral Commission such capricious and unchecked open-ended powers? You may argue that these provisions were enacted with good intentions. But I suspect strongly that Parliament was not aware of the fact that the path to hell or damnation is always paved with good intentions. Definitely, the framers of the constitution were too trusting and did not appear to have taken into consideration the greedy, immoral and opportunistic nature of man, especially the Ghanaians. Already some people have interpreted these constitutional slips to mean that membership of Parliament could be made up of any number above one hundred and forty (140), ad infinitum. Constitutionally they may be absolutely correct. Well, until and unless these constitutional provisions are amended we can safely conclude that there is nothing we can do about our predicament. We may as well learn to live with it!

With its size, population and chronic financial problems Ghana does not need 275 MPs to run a competent and efficient democratic system of government. We have no choice but to retain them because enactment of retroactive legislations is frown upon under the constitution. However, can we appeal to the EC, at least on moral, humanitarian and fiscal grounds, not to increase this number even if it infringes its constitutional rights? Ghanaians want the EC to note that what Ghana needs are quality, and not quantity, MPs who are well versed in the Standing Orders and the Constitution and are well motivated, competent and efficient. Ghana does not need just any number of MPs who are poorly resourced and motivated and who cannot perform their parliamentary duties satisfactorily. Neither do we need an army of MPs just to satisfy the principle of people’s representation or to prove that we are democratic.

As indicated earlier, the retention of the existing 275 MPs can be excused or defended on legal grounds. But we need to go beyond that and link it to a more sublime reason of adjusting our political system to include the Mixed Member Proportional Representation System (MPRS). Under this system, the 275 MPs will be divided in two. This also implies that the number of existing constituencies will be reduced by half. Half the number will be elected directly by the electorates to represent constituencies on a party ticket in a Westminster first-past-the-post or the winner-takes-all system. The other half will be nominated or appointed by the political parties under an accepted proportional representation formula.

The Mixed Member Proportional Representation System (MMPRS) has many advantages over the Westminster, first-past-the-post system. For instance, the MMPRS is said to be more representative, fair and responsive. It is also more flexible and pragmatic. It is need based and promotes consensus building even though it requires a lot of tolerance and maturity to operate it. It has an in-built mechanism to satisfy those who yearn for constituency representation as well as those who yearn for need-based representation. Issues concerning gender balance and women representation, people with disability, professionals and technocrats who do not want to participate in party politics and lack of experts and specialists in Parliament are reasonably and equitably catered for under MMPRS. Simply put, the MMPRS gives each political party winning at least five percent of the popular votes an overall number of seats in parliament proportional to its share of the vote. And yet, since half of those seats come from single-member constituencies, each citizen still has his own member of parliament.

Personally, I do not think we need 275 MPS to run an efficient democratic system of government. What Ghana needs is about 140 qualitative, well motivated, oriented, skilled and competent MPs. Parliaments in the 4th Republic have amply demonstrated that the work of Parliament can be done by less than 275 MPs. Contributors at a recent Seminar organized by the Ministry of Parliamentary Affairs on “Nurturing Career Legislators in Ghana…” lamented and bemoaned the fact that “out of 275 MPs you cannot put your hand on 100 MPs to do the work of Parliament” “You come to the House and you hardly see 80 MPs in the Chamber” They pointed out that MPs’ attendance and input at the consideration stage of bills is embarrassingly low and scanty. So what does Ghana need 275 MPs for? A maximum of 140 MPs will do. Unfortunately, the present number of 275 MPs cannot be reduced so out of necessity they should be retained with a stern instruction to the Electoral Commission not to increase the number under any condition or circumstance.

It is very clear to me that effective legislation, representation and oversight of the Executive do not necessarily require a large number of MPs. The effective and efficient execution of work of Parliament depends largely on competent, well motivated, sensitized and quality MPs. But these types of MPs do not come cheap and easy. They have to be produced by Parliament through exposure, orientation, training and capacity building. There is, therefore, the need to have a well structured, resourced and well staffed Parliamentary Training Institute (PTI). In addition Parliament should always remember that adequate and effective information and research services system is key, in fact, indispensable in the task of moulding and empowering MPs. 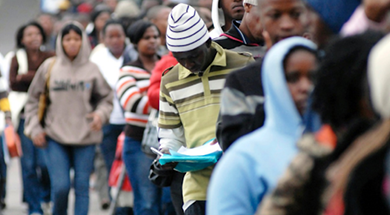 UNEMPLOYMENT RATE IN GHANA REDUCES BY 3.5%

Dashed hopes and dreams of a Ghanaian Librarian (2)