In 1974, when the Code for cargo sharing came into force, the Black Star Line, the national line of Ghana had sixteen (16) vessels each with a carrying capacity of 10,000 metric tons. The Black Star Line which was incorporated in 1957 was on a joint venture agreement between Zim Israeli Line and the Government of Ghana. The Company Started with four (4) namely SS Volta River, SS Anko- bra River, SS Densu and SS Tano River.

By the UNCTAD Code for cargoes sharing, Black Star Line was to carry 40% of all import and export cargo, trading partner 40% and cross traders 20%. Black Star Line was carrying cocoa beans and products, logs and sawn timber, coffee, shear-nut and – exports and on return trips carried machinery, cars, goods and also cargo for other West African countries. There was Kadas, Remco and Volta Line which were being operated by private companies all had goods to carry due to the UNCT- AD Code.

The Black Star line vessels were instrumental in the building of Akosombo Dam as the M/V Lake Bosomtwi with a heavy lift crane and a carrying capacity of 150 tons lifted all the heavy machinery and plants for the Akomsombo Dam and other factories including Valco. The Black Star Line also played a vital role in in the Middle East by carrying Soldiers, Police and other personnel to East, Ango- la, Liberia during the ECOMOG operations. Black Star Line vessels were also used in carrying Ghana from Nigeria during the quit order for Ghanaians in Nigeria.

From the operations of Black Star Line came the opening of Tema Shipyard and Drydock to dock and repair the Black Star Line Vessels. Businesses like clearing and forwarding sprung up, Ship Agency business, ship stevedoring business also came into being the incorporation of Ghana Cargo Handling Services which competed with those of Liner Agency, Maersk Line, Holland West Africa Line and .

Part of the export freight was received in Cedis to help shipper conserve foreign money. What Black Star Line did not do was to operate bulk carriers to carry our bauxite and manganese cargo and also tankers to bring in our petroleum products and carry crude oil for TOR. The question is why Black Star Line disappeared when the Nautical College is upgraded to a Maritime University whereby the institution trains Cadets and Officers at high cost and has no vessels on which the Cadets could work on when they pass out.

What has happened to the 40% of the import and export cargo the UNCTAD Code reserved to our National fleet? The Government is seriously expanding the ports of Tema and Takoradi for foreign vessels? Black Star Line Officers are being sought in all maritime countries for their competence. The Black Star Line had a force of 4,000 workers i.e. both afloat and ashore. Can’t the Government look again at the shipping industry of Ghana to enable us foreign exchange, technology transfer and also compete in the world since our children and what has come out of this. The problem with state organization are several interferences by Government officials and putting their personnel into they do not deserve that has put Black Star Line out of operation.

The writer is a Maritime Consultant

Rehabilitation of cultural centres in the country ...A step in the right direction 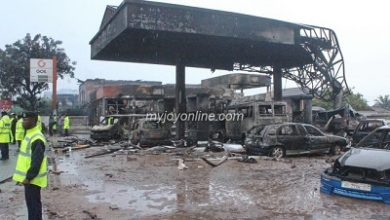