The road to war for CJ, Elliott and Kieran ran through Facebook, a cheap flight to Poland, and a cold night sleeping outside a railway station.

We meet the former British soldiers in Ukraine just outside a school, a couple of kilometres from the border with Poland. They are waiting for a minibus to transport them, along with other recruits, to Lviv.

“I just can’t sit at home and watch what’s going on and carry on as usual,” says CJ Darton, who served for seven years with the Royal Anglian Regiment.

“If you’re not fighting in someone else’s street, does it end up in yours? Do my kids become a target? Do my mates’ kids?”

Between them, the three men have 19 years of experience in the British military, and all did tours in Afghanistan.

After exchanging messages online, they met for the first time at Stansted airport as they waited to catch a £20 Ryanair flight to the Polish city of Krakow.

“We were stopped by police on the way out,” recounts Kieran Perkins, 35, who works as a plumber near Brighton. “They said ‘fair play to you’. As far as I’m aware we’re not doing anything wrong.”

Hundreds of former British soldiers who have completed their time in the armed services have said they want to go to Ukraine to fight or help with medical or humanitarian efforts.

Many told the BBC earlier this month that they are getting mixed messages from the government about whether they should go.

The legal position at home is vague. In February, Foreign Secretary Liz Truss encouraged people to go, only for Downing Street to advise people “with no combat experience” not to. The Ministry of Defence, meanwhile, says it may be against the law and could lead to prosecution.

That first night in Poland the men slept out outside Przemyśl railway station, before walking across into Ukraine the following morning. Elliott Davies, a construction worker from Colchester, Essex, and CJ had both told their families where they were going.

Kieran, a father of four, had not.

The former armoured vehicle driver with the Princess of Wales’ Royal Regiment didn’t tell the children’s mothers, he says, trying to suppress a smile.

“I didn’t even tell my mum. I just thought because I’m only away for a short period of time… I didn’t want to worry anyone.” 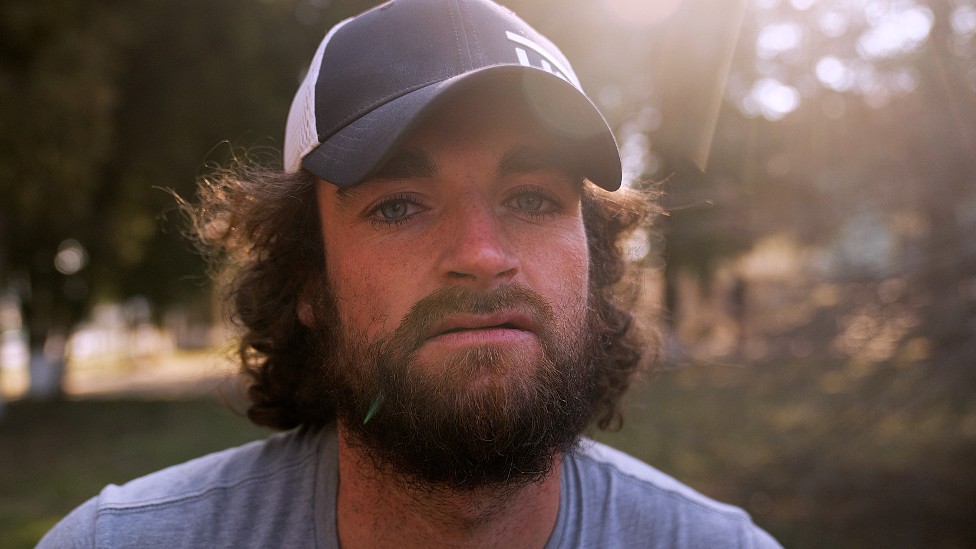 BBCWhere will it stop? Who else could suffer if we don’t do something? Elliot
Former Grenadier Guardsman

Kieran is not planning on a long war. He only wants to stay in Ukraine for two or three weeks before returning home, explaining that he has childcare responsibilities and a birthday coming up.

“I’m not expecting to get to the front line in that time. But if everyone chips in to help then it takes the weight off the people that are really working hard right at the front line.”

By contrast, Elliott says he’s in Ukraine for as long as it takes.

“I’ll help out wherever I can in the field,” he says. “Anywhere from back to front.”

Bearded, with long, curly hair, the 28-year-old served for seven years with the Grenadier Guards and says he is ready, if necessary, to die in Ukraine.

“Where will it stop? Who else could suffer if we don’t do something?”

Also waiting by the side of the road is an American ex-marine, Nate Vance. A consultant in the oil and gas industry, he felt it was his duty to come and see what he could do.

And how would he respond to those who say this war is a long way from the United States?

“So was Germany in World War Two. If he [Russian President Putin] gets away with it and he’s successful, it just encourages more of that behaviour.”

As they chat to us the men somehow manage to miss the minibus supposed to transport them and other prospective recruits to the city of Lviv.

So they board a regular bus, and end up chatting to Julia, who has just dropped her daughter at the border to travel into the European Union as a refugee.

“Thank you very much that you have come here to help,” she tells them. “Our Ukrainian soldiers are also very brave, very brave.”

The men now have a choice to make. One option is to sign up with Ukraine’s International Legion. That could mean committing to stay for the duration of the war. In return they’d get paid the same as rank-and-file Ukrainian soldiers.

A more flexible choice is to remain unattached, and link up with other British former soldiers who are already fighting at the front line, bypassing what might turn out to be painful Ukrainian bureaucracy.

As they prepare to leave I ask whether it was the excitement of war that had brought them to Ukraine.

“Anyone who thinks we’re war junkies or war tourists needs to stick to watching the news,” CJ says.

“There is no excitement to war. There’s nothing nice about dead kids at the side of the road.”

Palestinian workers forced to get off Israeli bus

Zelensky: War must end with liberation of Crimea

Palestinian workers forced to get off Israeli bus

Zelensky: War must end with liberation of Crimea