Sunday the 21st of June, 2020 witnessed one of the saddest event, in living memory, in Kumpese in the Amansie-West District of the Ashanti Region.  It’s Chief (Odikiro) Nana Ofori Amanfo II, popularly called Akropong, passed away in the morning at the Agroyesum Catholic Hospital.

Nana Ofori was born in 1953 at Akropong, a village in the Amansie-West (Mansoh).  His father’s name is Opanin Kofi Boateng (Koomfire) and mother’s name, Adwoa Akomaa.

Both parents hail from Kumpese.  Nana Ofori belongs to the Aboronkaase family of Mansoh-Nkwanta, which is the name of the family that rules Mansoh (Amansie-West).  Nana Bi Kusi Appiah II is the current Paramount Chief (Omanhene) of Amansie-West.   Nana Ofori attended the Kumpse-Akwasiso L/A Middle School from 1959-1969 and completed his formal education at the School of Accountancy at Bekwai.  Thereafter he married his first wife called Aunti Mary who is a native of Ayamfore in Denkyira.    Nana Ofori therefore relocated from Kumpese to Ayamfore, where he used to buy rice from farmers, remove the husks and sell to consumers.  He was stationed at Potukyii (Agona Pot) in the rice business and used to transport his rice to Agona Nkwanta market on Wednesdays, their market days.  Nana Ofori was therefore very popular in Sefwi, Ayamfore, Deaso, Denkyira etc.

That was from 1972-1979.  After a successful rice business Nana Akropong turned to cocoa farming and cultivated a large acreage of cocoa farm.  He shared a common boundary of about a mile with the writer, who inherited his grandfather’s cocoa farm in the same village.  While farming he was at the same into Small Scale mining business and owned the Abotereye small scale Mining Company that used to operate at Tantumso, one of the biggest small scale mining centers in the country.

Nana Ofori was very hard working and contributed a lot to the development of the village where he was installed as the Chief.  First, he was instrumental in bringing electricity to the village.  Once electricity was disrupted after a fierce storm that brought down electric poles and wires.  He sent me to inform the Electricity Corporation at Santase round about in Kumasi about it.

They promptly responded by coming to the village and professionally repaired the damage in the course of a day.   The total cost of repairs, amounting to ten million cedis (¢10m) was paid by Nana from his personal purse.

Another important contribution by Nana to the physical development of Kumpse is the installation of a mobitel must (MTN) in the village. This has greatly facilitated communication between Kumpese and the outside towns and villages, especially with such neighbouring villages as Nyankomasi and Akwasiso.  But most importantly workers at the Asanco Mining Company Ltd., resident in neighbouring villages, can now communicate with ease.  The Asanco Mining Company Ltd. is stationed at Koninase-Nkran, mining gold in the area.

Through Nana’s foresight and industry he has also succeeded in the construction of a market at the Kumpese-Akwasiso-Abiram Junction.  This is a long-awaited market that will serve the whole area of Amansie South.  Construction is in progress and will miss Nana a lot.  The above enlisted works are only the tip of the ice-berg concerning the total infrastructural developments in the pipeline which Nana has planned for the town.  Last but not the least, one of the contributions for which he will be always remembered is the organization of a football gala among the neighbouring villages.  Nana Ofori was installed as the chief of Kumpese in 1986 and was chief for thirty four years.  It was Nana Bi Kusi Appiah II, the Paramount Chief of Amansie-West who appointed him as Chief of the village.  The following is a list of chiefs who have occupied the Kumpese Stool: Nana Yaw Ackom (1901-1943).

Nana Yaw Gyempeh (1943-1957), Nana Adu (1975-1986).  They were all appointed by the Omanhene of Mansoh-Nkwanta to whom they swore allegiance and served.  Nana Ofori is succeeded by his wife Madam Akua Akyaa and three children.  Till the appointment of a new Chief Nana Nkwantahene has appointed Opanin Kwaku Manu as caretaker.  May Nana’s soul rest in peace.

Mallam Abdul Mumin, popularly called Mumuni a senior brother of Nana Ofori, also passed away on the same day as Nana.  He was buried the same day by Sofo Sadiq Kaakiri the current Circuit Missionary who performed his funeral prayers.

Mallam Mumuni was an elder of the Ahmadiyya Movement in Kumpese and in the Amansie-West.  Born in 1945 he was the Imam of the Kumpese mosque.  He also used to prepare the corpses of dead Ahmadis for burial and was involved in all Ahmadi activities.

Mallam Mumuni had two wives and four children.  His first born is Kofi Mallam. He was a mechanic, tailor and then a farmer.  He spent the last three years sick in bed till his death on 21st June, 2020.  May Allah grant him a lofty place in paradise.  Amen.

National Interest Movement People’s Charter …We are promoting prosperity for all, not for a few-Dr Abu Sakara

A Case for a fitting Jasikan District Hospital 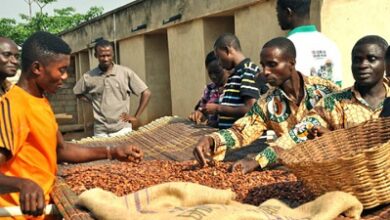 INSURANCE FOR COCOA FARMERS – AN IDEA WHOSE TIME HAS COME