It is divine destiny. The Liberal Party of Ghana (LPG) will win Election 2020 from the grace and spirit of God.

This was the prophetic message of a confident presidential candidate of the LPG, Mr Kofi Percival Akpaloo, during an interview with the Ghanaian Times in Accra yesterday.

Mr Akpaloo who is the founder of the party and first time presidential candidate explained that apart from God’s grace, Ghanaians have also bought into the LPG messages about how it would transform the country, if it wins the elections.

Hence, the electorate would vote massively for the party in the December 7 general election.

According to him, he has kicked the ground running by engaging in an intensive campaigning throughout the country and had been receiving favourable responses from the electorate.

“As I speak to you my campaign caravan is heading to Kumasi, and other parts of the country, so I am positive my effort will not be in vain.

The two main political parties, New Patriotic Party (NPP) and National Democratic Party (NDC) have dominated the political landscape since the Fourth Republic, but this year I will break that duology,” he stated.

The LPG presidential candidate said the party’s blueprint has made it clear how the party would harness Ghana’s internal natural and human resources to develop the country.

According to him, the blueprint has prioritised education, health care, agriculture, information technology, research and development.

Mr Akpaloo noted that when given the nod, the LPG would put money directly into the pockets of Ghanaians by paying allowances to every child and unemployed citizens.

The unemployed above 18 years who have not worked before will receive GH₵ 400 and those who have worked but lost the jobs will be paid according to their past salaries. This is what we have dubbed Job Seekers Allowance”

He added that in order to achieve this programme the SSNIT law would be amended.

Mr Akpaloo stated that his party would establish a GH₵ 10 billion job fund to cater for those who want to be self employed, especially tertiary education graduates and those seeking apprenticeship.

“Again we will set up a broadband network with wifi  across the country and can be accessed free of charge by students from basic to university level and university education will be free.

According to him, most SHSs would be transformed into campuses of universities, saying, “My government will further put in place the needed resources, policies and incentives which will bring about the development of the educational system, from the primary, secondary through to the tertiary level.

“The development of human resource with modern ways of learning and using technology is the surest way of building a prosperous nation.”

He promised that when the LPG is voted into power, it would ensure that the country’s tertiary institutions would be the centres of excellence.

He added that the country would mechanise farming to ensure it produce enough of want it consume locally and reduce its dependence on importation of agriculture produce.

“Within two years in office,  an LPG administration will build the largest cocoa processing company to add value to our raw cocoa beans.

We will give assistance to our local poultry and rice farmers, the end result is to produce enough to eat, create wealth and jobs.

Asked how he would generate financial resources to achieve these policies, programmes and interventions, he answered, “I will generate and borrow funds internally.” 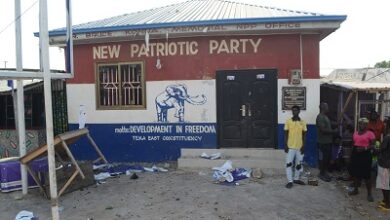