One of Ghana’s sensational boxers, Wasiru ‘Gyatabi’ Mohammed is set to face John Amuzu from Benin at the Bukom Boxing Arena for the World Boxing Organisation (WBO) Global title.

Scheduled for January 31, the fight which would be the first on the Ghanaian boxing calendar for the year would see Gyatabi making his first title defense.

The knockout specialist defeated Tanzanian Loren Japhet in June 2019 in a round 11 knockout to win his current title and is expected to replicate that performance against the Beninois.

At 22, Gyatabi remains undefeated with wins from his 11 professional fights and determined to keep his 100 per cent record going into the year which promises to be exciting for the boxing fraternity.

Amuzu, however, cannot be underestimated as he comes into the fight with a huge experience and would give the Ghanaian a run for his money.

With 22 wins out of 23 fights with just a defeat and a scary 20 knockouts to his credit, Amuzu would definitely be a hard nut to crack.

Also on the bill as a co-main feature would be a fight between Ghana’s Manyo Plange and Tanzanian, John Chuwa for the vacant WBO Global flyweight title.

Plange, also undefeated with 18 wins out of his 19 professional fights is expected to make a grand return, seven months after defeating Emmanuel Otoo in Accra.

His opponent however is the more active of the two, coming into the fight two months after a knockout win over William Kianga in November to improve his record to 18 victories in 22 fights with four defeats.

The bouts would come under the auspices of Fist of Fury boxing league which would be launched officially tomorrow in Accra in collaboration with Fight Ready Boxing Promotion.

According to the organisers, this year’s Fist of Fury (the second edition) would witness more global fights as they look forward to make Ghana a hub for boxing in Africa and the world at large. 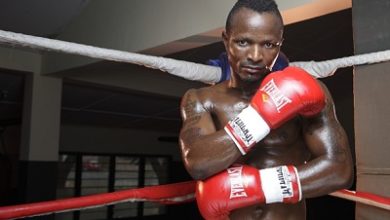