Ghana will soon produce its own paper to boost the paper industry in the country and also for export to the West African sub region.

The 2.8 billion dollar project which is under a Public-Private Partnership (PPP) agreement is a joint venture between the government of Ghana and Greenland Resources AB of Sweden to produce 1.5million ton of pulp and paper annually to feed the paper industry in the country.

Mr Kwadwo Owusu Afriyie, Chief Executive of the Forestry Commission (FC) made this known at the signing of a Memorandum of Understanding (MoU) to kick-start the project at the head office of the Commission at Achimota in Accra on Monday.

The MoU was signed on behalf of the government of Ghana by Mr Owusu Afriyie, CEO of the FC and Mr Torbjorn Johannson, President of Greenland Resources AB of Sweden which has the expertise in pulp mill projects globally.

In his remark, Mr Afriyie indicated that the agreement was to establish a 200,000 hectare large-scale forest plantation of pulp wood in seven years to feed the pulp and paper mill which will be sited in the Easter Region to facilitate export among others.

Mr Afriyie said that the FC and Greenland Resources have been working together over the years on the project where due diligence, pre-feasibility studies and field reconnaissance assessment have confirmed the viability of the project.

In addition, the agreement which is in stages will in the next two years carry out detailed due diligence, technical and financial analysis, species and hybrid selection and trials, biodiversity surveys and various mechanisation techniques among others suited to the Savana terrain for the development of detailed project implementation plan.

Mr Afriyie indicated that, currently Ghana’s imports of paper products is estimated at $268million annually and hoped that when the project takes off, it will lead to significant foreign exchange savings and reduction in the price of paper locally.

He said that, three forest sites in the Savana Region have being earmarked for the plantation; the Yakombo forest reserve in the Buipe forest District, Kenikeni and Yerada forest reserves in the Bole forest district, totaling 215,000 hectares whiles other Savana areas are being looked at for similar plantations.

He said the project will create about 50,000 jobs and also greatly enhance carbon stock, offering protection from wildfires leading to significant enhancement of carbon stocks and avoid degradation from annual wildfires, thereby helping in the global fight against climate change.

The chief executive added that it will also support national efforts to replace plastics with paper products, especially in the shopping and packaging industries.

Mr Torbjorn Johannson, President of Greenland Resources in a statement indicated that the agreement signed is a milestone to pave the way to execute the project.

“Since seven years we have being looking for the possibility to open a pulp industry in West Africa, Ghana was found to be suitable due to the stable political system and transparency in the country”, he said.

He said Ghana has a brighter future in the paper industry since the global demand is about 6 million tonnes annually, saying that the mill will be one of the largest in the world.

He hoped that the project which is the largest in West Africa will change the fortunes and the economy of Ghana. According to him, the mill will be self sufficient in energy production through bio produced electrical energy which could add 150 MW power continually to the national grid.

﻿Ghana, South Africa relations has to flourish for investment, trade ties to grow 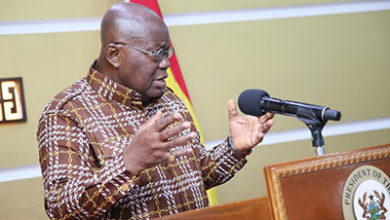 To extend 2-week lockdown or not:Ghana on edge …as it awaits test results of 19, 276 contact tracing persons