The Ghana Journalists Association (GJA) has cautioned the youth to desist from engaging in any unlawful acts that will disturb the peace of the country.

Mr Affail Monney, president of the association who gave the advice on the International Peace Day celebration called on the youth to contribute to guarding the democratic gains Ghana had chalked over the years.

The United Nations has dedicated September 21 to strengthen peace across the world: this year’s day was celebrated on the global theme: “Shaping Peace Together-the role of the youth in peace building”.

It was organised by the National Peace Council (NPC) in collaboration with the GJA and Auntie Is Merkezi Organisation (AIMO) and attracted civil society organisations, the business community, Ministry of Interior, Ministry of Information, National Youth Authority, political parties, traditional authorities, and religious leaders, among others.

Mr Monney said statistics showed that the nation had a young age structure, with about 57 per cent under the age of 25, which clearly vindicated the rectitude of focusing the celebration on the youth.

He observed that during elections, politicians had the propensity to use the youth to perpetrate and incite violence, a situation which, he noted, was a threat to national elections and democracy.

Mr Monney said instead, the youth must channel that energy into ventures that would help in their personal development and that of the country.

For his part, Maulvi Mohammed Bin Salih, Board Member of National Peace Council (NPC), appealed to political parties to stop bussing people from outside constituencies for any political gains and declared “they should respect the Code of Conduct and the Vigilantism and Related Offences Act 999.

He called on citizens to avoid intemperate language and refrain from lending services to “power-thirsty politicians” who would only lead them to destruction, and asked the media to exercise maximum restraint and be circumspect not to plunge the country into chaos.

Maulvi Bin Salih also urged religious and traditional institutions to join forces to sustain the peace in the country.

Later, a peace emblem was unveiled to mark the celebration of the event. 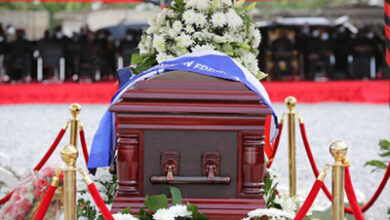