President of the Ghana Football Association (GFA) Kurt E.S Okraku, has inspected a 6.5-acre land secured by the federation at Wintogo, Bolgatanga in the Upper East Region, for the construction of an astro turf.

The land, which was donated by Mr Ababu Afelibik, headmaster of the Bolgatanga Senior High School, has been duly registered in the name of the GFA.

The GFA, with the help of the Upper East Regional Football Association, chiefs, elders and the community on Wednesday, unveiled the signpost for the project at a brief ceremony.

This followed the decision of the Executive Council to use part of the project funds from the FIFA Forward 1.0 programme for the construction of two astro turfs – one at Prampram and the other at Bolgatanga.

Also in attendance were Executive Council members of the Regional and District Football Association for Upper East.

The construction of this astro turf will come as a relief to the people of Bolgatanga who have been without a quality playing field for years.

The pitch, when completed, will serve the people of Bolgatanga and its environs.

The FIFA Forward 1.0 fund was one of the key issues that Mr Kurt Okraku discussed with FIFA President Gianni Infantino during his visit to the Home of Football, Switzerland in December 2019.

Since the visit, the GFA has been working with the FIFA development officers who visited Ghana in March 2020.

Other projects earmarked under FIFA Forward 1.0 will be announced in due course. 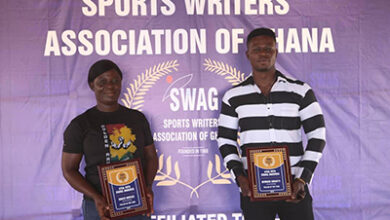