At a recent presentation on health benefits of cocoa, I was asked to shed light on how regular consumption of polyphenol-rich cocoa could promote weight loss.

Obesity is one of the most common nutritional diseases worldwide. According to the World Health Organization (WHO), obesity is a body mass index (BMI) ≥ 30. In 2014,more than 1.9 billion adults, 18 years and older, were overweight (BMI ≥ 25). Of these, more than 600 million were obese.Obesity could also lead to serious diseases, such as cardiovascular disease (CVD), type 2 diabetes, and cancer. A 10 kg higher body weight is associated with a 3.0 mmHg increase in systolic and 2.3 mmHg increase in diastolic blood pressure. These increases translate into an approximately 12% increased risk for coronary heart disease and 24% increased risk for stroke. An epidemiological study revealed that obesity elevates systemic oxidative stress in humans.

Obesity results from a lipid metabolic imbalance and leads to fat accumulation in adipose tissues. Obesity is a major health problem worldwide, increasing the risk of type 2 diabetes and other chronic diseases. Obesity is often caused by hypertrophy (increase in cell size) and hyperplasia (increase in cell number) of adipocytes. While adult-onset obesity is typically due to adipocyte hypertrophy, adipocyte hyperplasiamainly occurs in children and morbidly obese adults.Therefore, both hypertrophy and hyperplasia of adipocytes can be important targets in treating obesity.

The adipose tissue is a significant source of pro-inflammatory mediators-tumour necrosis factor (TNF)-𝛼, interleukin (IL)-6, resistin, leptin, angiotensinogen, and adiponectin. In adipocytes, oxidative stress induces the production of the afore-mentioned pro-inflammatory adipokines as well as leptin and resistin, which play a role in maintaining insulin resistance. The relationship between obesity and insulin resistance has been recognized for decades. One potential strategy to reduce inflammation and insulin resistance is consuming polyphenol-rich foods, such as cocoa.

Polyphenols are naturally-occurring compounds in food products such as fruits, vegetables and cereals, and also in specific beverages such as wine, tea, coffee and cocoa. On a perserving basis, cocoa has higher flavonoid content andantioxidant capacity than red wine (2 times), green tea (2-3 times), and black tea (4-5 times), respectively.

Cocoa is one of the most polyphenol-rich foods. Polyphenols in cocoa beans belongto the flavonoid family and mainly include flavan-3-ols, presented as monomers, such as (+)− and (−)− isomers of epicatechin and catechin, and polymeric forms which are a build-up of epicatechin subunits. Minor cocoa components include phenolic acids, flavonols, and stilbenes.

Cocoa liquor is the paste derived from cocoa beans, the so-called nibs, and it is composed by non-fat cocoa solids and cocoa butter. Cocoa powder is obtained by getting rid of some of the cocoa butter from the liquor. Finally, chocolate results from the combination of cocoa liquor with cocoa butter and sugar. The latter explains the reason for the consumption of polyphenol-rich dark chocolate (with a minimum of 70% cocoa solids) for the health benefits of cocoa.

With regard to lipids, cocoa butter contains both monounsaturated and saturated fatty acids (FAs). Oleic acid is the major monounsaturated FA that is present in similar amounts to those contained in the olive oil. Conversely, palmitic and stearic acids represent the main saturated FAs.Cocoa butter, a fat derived from cocoa plants and found predominantly in dark chocolate, contains an average of 33%monounsaturated oleic acid and 33% stearic acid. In general, plant stearic acid neither lowers high-density lipoprotein(HDL) nor increases LDL or total cholesterol. Stearic acid has been found to be anti-atherogenic, and accounts for one-third of the lipids contained in cocoa butter.

There is evidence to show that cocoa administration decreased visceral adipose tissue, thus changing the expression of genes, which are involved in the generation of enzymes and molecules for the occurrence of FA synthesis and thermogenesis in liver and white adipose tissue.  In another  study that assessed dark chocolate smelling effect on  appetite response showed  satiation response inversely correlated with ghrelin levels. Since ghrelin is involved in adiposity induction, the inference was that polyphenol-rich cocoa/chocolate reduced appetite and in-turn prevented weight gain. Another study showed that flavonoids act on peroxisome proliferator-activated receptors (PPARs), thus behaving as agonists of PPAR-α and partial agonist of liver X receptor α.Additionally, increased expression of PPAR-γ, which, in turn, increased expression of adiponectin and glucose transporter 4, was another mechanism elicited by cocoa flavonoid consumption. These events resulted in reduced lipogenesis (metabolic formation of fat), induction of lipolysis (breakdown of fats and other lipids), and increase in adiponectin secretion. Adiponectin also reduces lipid deposition and insulin resistance, thus mitigating obesity.

Another important function of cocoa flavanols related to obesity is the delay of low density lipoprotein (LDL) oxidation. Cocoa flavanols decrease F2-isoprostane levels, which represent in vivo markers of lipid peroxidation. In healthy human volunteers, evidence has been provided that cocoa consumption led to decrease of F2-isoprostane and thiobarbituric acid reactive substances, which are biomarkers of LDL oxidation and lipid peroxidation, respectively. Cocoa consumption increased plasma HDL cholesterol, while decreasing plasma triglycerides. These results suggest the healthy benefits of polyphenol-rich cocoa consumption by changing the expression of genes involved in FA catabolism and thereby prevent obesity.

The key point as regards weight loss is the consumption of polyphenol-rich cocoa/cocoa products. 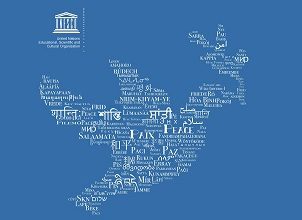 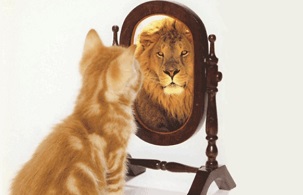 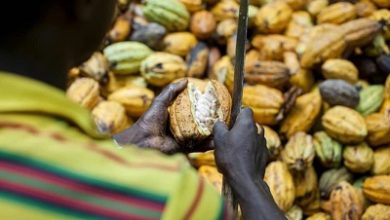 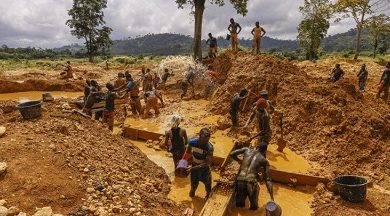 OUR ANCESTORS DID NOT LEAVE US DEFENCELESS AGAINST THE LIKES OF GALAMSEYERS! by CAMERON DUODU