Two suspected car snatchers have been arrested by the Central Regional Police Command when they attempted to sell a Hyundai Getz taxi cab with registration number ER 797­18 at Ola­Black Star, a suburb of Cape Coast.

The suspects, Prince Tettey, Gaetan Eke, and a third accomplice, who was currently on the run, allegedly pulled a knife and ordered the victim, who was driving the vehicle, to stop and surrender the ignition key of the taxi cab at Dodowa in the Greater Accra Region.

Briefing journalists, Chief Superintendent Reuben Asiwoko, the Central Regional Crime Officer, said the suspects were arrested on Tuesday, January 14, at about 5.30pm, after the police received information that three young men were selling a taxi cab at the said location.

He said on Tuesday, January 14, at about 10am, the victim, Kwame Gyimah, 28, a taxi driver, was driving the Hyundai Getz taxi, when two unidentified men hired his services from Dodowa to Ghana Christian International Senior High School near Sota, a suburb of Dodowa and one other person joined them on their way.

Chief Sup Asiwoko said half way the journey, one of the suspects pulled a knife and ordered the victim to stop and surrender the ignition key of the vehicle.

He said the driver resisted, and the suspects attacked and pulled him out of the vehicle, and bolted with the car.

Chief Sup Asiwoko said the victim was rescued by a Good Samaritan, who took him to the Shai Osudoku Government Hospital, where he was currently responding to treatment.

Woman in court for theft, forgery

Gunmen on rampage … fire at policeman 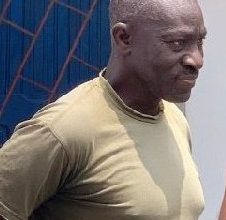