Ghana’s Consumer Price Index (CPI) for March slightly increased to 9.3 per cent from 9.2 per cent recorded in February, the Ghana Statistical Service (GSS) has said.

Speaking at a press briefing in Accra on Wednesday, the Acting Deputy Government Statistician David Kombat attributed the increase to price increases in coffee, tea, mineral water and fruits.

He said food inflation was 8.4 per cent, 0.3 percentage points higher than 8.1 recorded in February.

He indicated that four food subgroups such as coffee, fruits, mineral water and meat recorded inflation rates higher than average rates of 8.4 per cent.

He noted that four subgroups recorded inflation rates higher than the group’s average rates of 9.7 per cent.

The sub groups were recreation and culture (14. 1 per cent), transport (13.7 per cent), clothing and footwear (13.3 per cent) and furnishing, household equipment and routine maintenance (12.2 per cent).

For imported items, Mr Kombat said, the inflation rate was 11.1 per cent which was 2.6 per cent higher than that of locally produced items of 8.5 per cent.

He said the Upper East Region recorded the lowest regional inflation rate of 7.9 per cent.

The Consumer Price Index (CPI) measures the change over time in the general price level of goods and services that households acquire for the purpose of consumption with reference to price level in 2012, the base year which has an index of 100.

Wise can return when united - Skipper 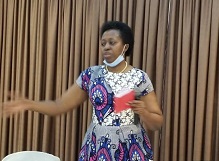