A sod-cutting ceremony was on Wednesday held for the reconstruction of the Tarkwa & Aboso (T&A) Park in the Tarkwa-Nsuaem municipality of the Western region.

Funded  by Gold Fields Ghana Limited, the GH¢65 million stadium project with a   10,400 capacity include a VIP lounge, spectators’ stand, dressing rooms for teams and match officials, a commentary box and conference rooms, an emergency and medical centre and a control and doping  room to be completed within a year.

The pitch would also have a perimeter wall and inner perimeter fence, floodlights, a score board and a standby generator.

Describing the project as a flagship, the Executive Vice President and Head of Gold Fields West Africa, Mr. Alfred Baku, said it was not just a renovation, but a comprehensive reconstruction to meet the aspiration of soccer fans in Tarkwa and the host team, Medeama Sporting Club.

The project, he added, would be one of the most modern sports facilities in the country.

“We recognise that a modern stadium will not only keep the hopes and aspirations of young footballers in our communities alive, but will also make Tarkwa one of the exciting venues for watching football matches. As an avid footballer and someone who played many times at the nearby Akoon Park, it is extremely gratifying for me to be driving the project. Indeed, we did it for Black Stars by sponsoring them for first two  World Cup appearance in Germany and South Africa, and we will do it for Tarkwa,” he said.

Mr. Baku explained that the work would be done in phases and assured that management would closely monitor the project to ensure that the reconstruction delivered the highest quality, within budget and on time.

He also urged the Ministry of Youth and Sports (MoYS) and relevant local government departments to develop an effective management of the facility after completion and hand over.

The Member of Parliament for Kwadaso, Dr. S.K.Nuamah, who represented the Minister for Youth and Sports, applauded Gold Fields for the stadium.

“What is happening in Tarkwa is wonderful; indeed, this is an example of what corporate companies can do. You are an example to other companies in the municipality and it’s important that you give back to the communities and this is exactly what Gold Fields is doing.” he stressed.

The Member of Parliament for Tarkwa-Nsuaem, Mr. George Mireku-Duker expressed his joy at the project and thanked Mr. Baku for the roles he played for the project to begin and pledged that it would not be abandoned.

Mr Mireku -Duker said: “The project would be a platform to expose football in Tarkwa to the world and will be a tool for development. Again, it will open up the area to tourism potentials because of the mining of gold in the municipality.”

The Tufuhene of the Apinto Traditional Area, Nana Adu Panyin II, expressed the gratitude of Wassaaman, noting that the T& A park would be modernised.

Highlife artiste, Kwaisey Pee has said many of the new artistes are arrogant. 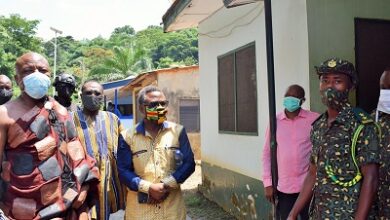