Five youths of Tontokrom in the Amansie West District of Ashanti and a police man, were injured during a clash between some irate youths of the town and a team of policemen, on Thursday.

Awal Mohammed, 26, Sakura Omar, 24, Fuseini Issah, 23, Kojo Tratra, 21, and Abu Salifu, 17, all farmers, were on admission at the Saint Martin’s Hospital at Agroyesum in the district, under police surveillance.

Lance Corporal Samuel Kugyenu of the Special Weapons and Tactics (SWAT) Unit, who was injured, was responding to treatment at the Military Hospital in Kumasi.

The five, in the company of their irate colleagues, were said to have attacked the police in an attempt to release three of their members, who had been arrested for alleged robbery at Benviko Company Limited, a mining company, at Tontokrom.

A statement signed by the Assistant Superintendent of Police (ASP) Godwin Ahianyo, Head of the Ashanti Regional Police Public Affairs Unit, and issued to the Ghanaian Times here, indicated that the police went to Tontokrom to execute a court arrest warrant.

It was issued by the Bekwai Circuit Court to arrest Emmanuel Asante, also known as ‘Oboy Emma,’ 39, Kwadwo Addo, 33, and Madasil Iddris, 24, for causing unlawful damage to property and theft of pump action guns, belonging to the mining company.

According to the statement while the police were returning after effecting the arrest, the suspects raised the alarm that they had been attacked by some armed robbers, which attracted the youth of the town, resulting in the confrontation.

The statement claimed that the youths armed with pump action guns, machete, and other offensive weapons, blocked the road with logs, metal bars, and demanded the release of their colleagues.

An attempt by the police, the statement said, to dissuade the irate group proved futile as the youth became more aggressive and violent.

The youth hit the knee of Lance Corporal Kugyenu with a metal bar, injuring him while others pelted the police with stones and other missiles, causing damage to the police vehicle.

In a self defense, the police fired warning shots, cleared the road blocks, and five youths were injured. 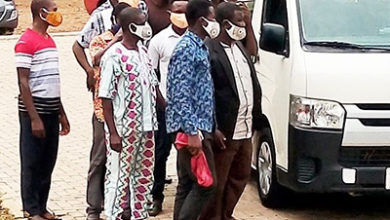