A 25-year old ex-convict has been arrested by the Nima Police for allegedly absconding with the mobile phone of a woman moments after proposing to her.

The ex-convict, Ifeanyi Chejioka, was arrested alongside George Godsway, a 32-year-old phone dealer to whom he sold the stolen Techno phone.

The duo would be arraigned for stealing and dishonestly receiving the phone, respectively.

Briefing the Ghanaian Times on Friday, the Nima Divisional Commander, Assistant Commissioner of Police (ACP) Abraham Acquaye  said in March, last year, Ifeanyi met the complainant in Accra and promised to marry her.

ACP Acquaye said he took her to a bank at North Kaneshie in Accra and pretended to withdraw money to convince her to accept his proposal, but he was unable to complete the transaction.

He said Ifeanyi consequently took her to a shop inside the West Hills Mall , and asked her to pick any item of her choice based on which together, they loaded the trolley with many items.

According to ACP Acquaye, when the shop attendant asked for payment, he borrowed the victim’s phone with the excuse of calling a friend to transfer money to the phone to enable them settle the bill.

But, the suspect made away with the phone leaving the victim stranded.

He said on January 8, this year, Ifeanyi tried to pull off the same modus operandi at Kokomlemle, but luck eluded him, and was arrested.

ACP Acquaye said in the course of investigation, Ifeanyi named the second suspect as the one he sold the phone to leading to his address.

He said the suspect’s strategy was the latest trick being used by criminals to dupe young women and therefore cautioned the public to be on the lookout.

He also asked persons who had fallen victim to his antics to report to the police. 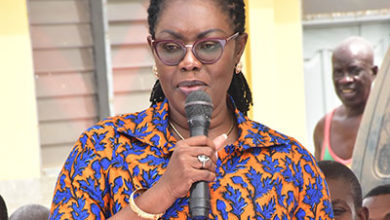